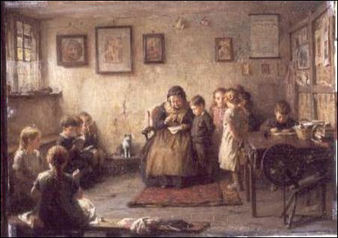 Dame schools were found throughout colonial America, and as the name suggests, these schools were typically run out of the homes of elderly women or widows in the community.  For a small fee (sometimes pennies), the "dame" would teach children what little reading, writing, and math skills she might have as she went about her household duties.  Children as young as 2 or 3 would attend, and girls would be taught more domestic skills such as sewing and cleaning, while boys were given more formal education.  For many girls, this is the only education they would receive, while many boys went on to grammar schools.

The video below shows a reenactment of a colonial dame school and provides information about these schools.  The second half of the video shows the memorization and recitation method of instruction mentioned below.

Though each region of colonial education was unique, there were many common methods of instruction.  For example, paper and writing utensils were typically scarce, so often times students were required to memorize and recite their lessons.  The "hornbook" - a wooden paddle with a copy of the alphabet, the Lord's Prayer, and sometimes a few Roman numerals - was a common feature of most colonial schools.  Later the New England Primer became the most popular textbook throughout the colonies, and was used to teach reading and writing. 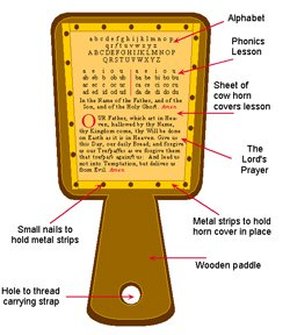 Diagram of a colonial hornbook.
Powered by