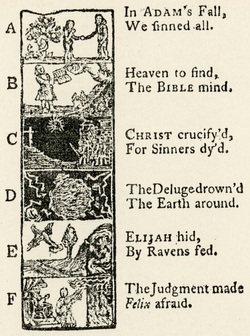 Education in the New England colonies was much more religious in nature than in the other colonies.  The Puritan influence was strongest here, and one of the primary goals was to teach children (who are inherently bad) how to behave as moral, Christian adults.  Schools in New England focused on an understanding of the Bible and the catechisms of the Puritan church;  this is illustrated through the passage of the "Ole' Deluder Satan Act" which pushed for literacy among all children.  If children could read the Bible, they could steer clear of "that ole' deluder Satan."  Discipline was also extremely strict, and sometimes bordered on abuse.

Education in New England was also more progressive than in other colonial regions.  They were the first to pass laws requiring public education, and remained the only region to have such laws for quite some time.  Towns of 50 families or more were required to provide a teacher while towns of 100 families or more had to provide a Latin school.  Though education was public, it was not yet free.
Massachusetts Education Laws - This link gives detailed information on the educational laws passed in colonial New England.  New England was the first to pass these types of laws, and was the first to institute required public education.

Old Deluder Satan Act - This link provides the original text of this law.
Powered by